Reading a story in The Economist last week about a new high tech production plant in Germany got me thinking about possible parallels in the evolution of some parts of higher education. 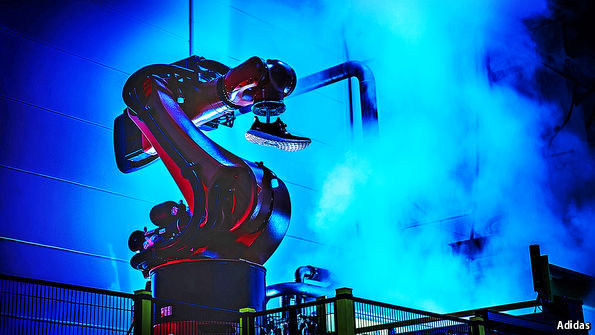 The Adidas story is fascinating in its own right. I hadn’t realized the sports shoe industry is worth $80 billion a year; though I did know manufacturing was quite labour-intensive and largely took place in Asia because of labour costs.   But this new plant is being built in high-cost Germany (with a second like it to follow in the US).

Under established production practices, The Economist reports that it takes up to eighteen months from conception of a new pairs of shoes until they start arriving in retail outlets.  The catch, however, is that about 75% of shoe models only survive in the market for one year.  This opens up a window of opportunity for manufacturers able to respond to shifting fashion preferences quickly.  (If I’m not mistaken, the Spanish clothing company Zara, rose to global heights by being able to respond much more quickly than its competitors.)

But back to Adidas.  The design, testing and production-simulation will all be done digitally and then the constituent elements (plastics, fibres and other stuff) will be brought together as latest-style shoes via a process that integrates computerized knitting, cutting by robots and layered spraying of material by 3D printers.  Not only is this vastly faster than existing processes, but it can also shift immediately from one shoe model to another – without the need for costly and time-consuming retooling.

The big advantage of this system is responding to customer preferences in particular locations quickly.  The thinking, apparently, is that these plants can be spread around the world, close to concentrations of customers.  The article’s author is clear about the implications of this for current production operations in countries like China, Indonesia and Vietnam:

…as advanced manufacturing expands, the need for armies of manual workers in Asian factories will surely diminish.

Which doesn’t mean Adidas will leave Asia – inconceivable, given that huge and expanding Asian middle class – but it does mean, that the current production facilities will be progressively superseded by this emerging production model and the dramatically increased capability for customer responsiveness it promises.

So then, what does this story about 3D printing (well, 3D printing plus digital technology more broadly) have to do with possible futures for higher education? Rather than making this a very long post, I’ll try make that case in a separate post in a couple of days.  Hold the Adidas story in your head, and mean time ask yourself whether you think any reasonable parallels can be drawn with at least some parts of contemporary higher education.